When the Survival Food Tabs were formulated, a host of factors were considered in order to adapt them to their purpose as a lightweight, emergency, life-sustaining food ration:
1. The less intake of food, the more efficient the body becomes. Basically, when food intake is reduced, it remains in the digestive tract longer and assimilates more completely.
2. Generally, of the food we eat, a great deal of it is not digested and used up as calories. The Survival Food Tabs are 100% digestible as well as completely assimilated by the body. The quality of the food we eat is more important than the quantity. Poor quality protein, carbohydrate and fat can put a strain on the digestive organ, especially the kidneys.
In the Survival Tabs, we have used protein of a high biological value, which is 100% utilized. This helps protect the body from cannibalism of its own protective tissues. The fat is composed totally of fatty acids which provide the essential ingredients of fat. The carbohydrates are of the high quality and 100% utilized too.
3. In 90% of all survival situations, some additional food will be available. The Survival Food Tabs are designed to be the Margin of Survival. For example, if one were lost in a jungle area, one might have to find grubs, insects, berries, small  animals or whatever to eat. One would have to adapt to the circumstances quickly until he found his way out or was rescued. The Survival Food Tabs would be that Margin of Survival, along with whatever one could gather, to sustain oneself as long as necessary. Another example, would be desert or sea survival. In these cases, little supplemental food may be available.
The Survival Food Tabs would sustain one as long as he would expect to live normally, before being overcome by exposure, the elements, or lack of water.

Evolved From the Early Space Program

The Survival Tabs have a long history. Back in the 1960's the Federal Government was searching for a food source that could be used in specialty situations. The objective was to find a product that would provide...

The resulting research was extremely involved and intense, and the product that evolved was used in the early space program. Eventually, a tablet was perfected and used widely as a emergency food. It came to be known as The Survival Tabs.
12 Tabs Per Day Is All You'll Need
The Survival Tabs will keep you alive and moving for months at a time, on the amount you can carry in your backpack. Our recommended consumption of 12 tabs per day may be decreased when other foods are available in adequate amounts and quality. Or it may be increased in times of complete starvation or extreme physical exertion. 12 Tabs provide...
100% of the U.S. RDA of 15 Essential Vitamins & Minerals
And that's not all. The reason The Survival Tabs are so effective, is that they are literally jam-packed with concentrated nutrition. The protein we use is only of the highest quality. Thats important because protein can be of varied quality. If it is poor quality, your body will not be able to assimilate it properly. With most food products, 30%-60% of the calorie content leaves the body unused. Survival Tabs are so completely digestible that 99% of their calorie content can be actually utilized for energy. 97% of the protein content is available for repair or replacement of essential body substances, such as blood, muscle and nerves.

The Tabs have been produced and packaged to last at least 10 years. Weve accomplished this in several ways. Number one, we have compressed the tablets with thousands of pounds of pressure with our specialized tablet presses. Oxygen and moisture, the arch-enemies of food, cannot penetrate the tablets to destroy the ingredients. Number two, we use a heavy-duty, opaque bottle to pack the Tabs. The bottle does not allow either light or outside oxygen to penetrate and deteriorate the product. Number three, the closure is a specially designed screw- type lid which, along with being screwed tight on the bottle, is sealed with tamper resistant tape. 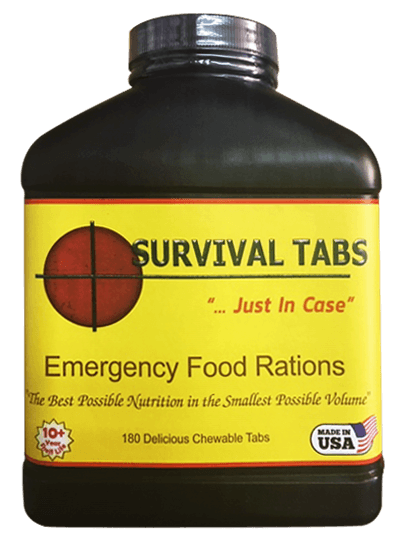 Others who use Survival Tabs

The Survival Tabs are standard-issue and carried on all aircraft of the Alaskan Helicopter Search and Rescue Squad for the past 8 years!
The Survival Tabs have been on several successful ascents of Mt. Everest!

The Survival Tabs are a convenient, compact, lightweight, lifesaving food ration for any emergency. They are completely nutritious, have a 10+ year shelf life and are absolutely delicious. Just let them melt in your mouth...you'll probably chew them up...they are so irresistibly good-tasting!