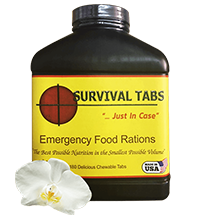 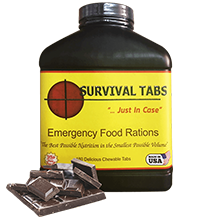 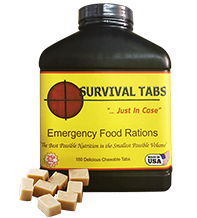 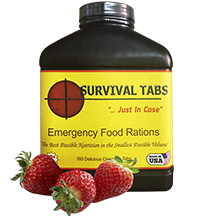 The Survival Tabs are a convenient, compact, lightweight, lifesaving food ration for any emergency. They are completely nutritious, have a 10+ year shelf life and are absolutely delicious.

"The Best Possible Nutrition in the Smallest Possible Volume"
"15 Days' Food Supply Under 2 Lbs."
The Original Formulation for the Survival Tabs evolved from research done in the Early Space Program.

When the Survival Food Tabs were formulated, a host of factors were considered in order to adapt them to their purpose as alightweight, emergency, life-sustaining food ration:

1. The less intake of food, the more efficient the body becomes. Basically, when food intake is reduced, it remains in the digestive tract longer and assimilates more completely.

2. Generally, of the food we eat, a great deal of it is not digested and used up as calories. The Survival Food Tabs are 100% digestible as well as completely assimilated by the body. The quality of the food we eat is more important than the quantity. Poor quality protein, carbohydrate and fat can put a strain on the digestive organ, especially the kidneys. In the Survival Tabs, we have used protein of a high biological value, which is 100% utilized. This helps protect the body from cannibalism of its own protective tissues. The fat is composed totally of fatty acids which provide the essential ingredients of fat. The carbohydrates are of the high quality and 100% utilized too.

3. In 90% of all survival situations, some additional food will be available. The Survival Food Tabs are designed to be the Margin of Survival. For example, if one were lost in a jungle area, one might have to find grubs, insects, berries, small animals or whatever to eat. One would have to adapt to the circumstances quickly until he found his way out or was rescued. The Survival Food Tabs would be that Margin of Survival, along with whatever one could gather, to sustain oneself as long as necessary. Another example, would be desert or sea survival. In these cases, little supplemental food may be available.

The Survival Food Tabs would sustain one as long as he would expect to live normally, before being overcome by exposure, the elements, or lack of water.